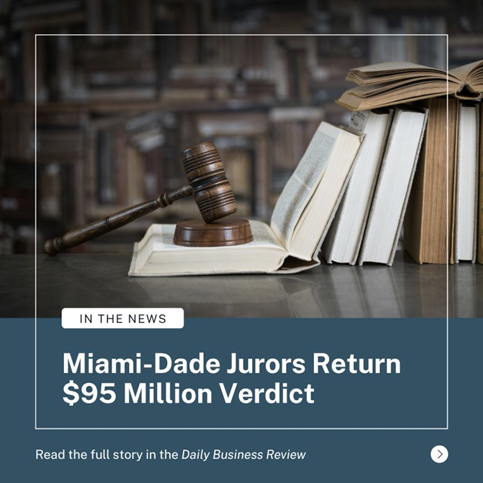 Davis Goldman Co-Managing Partner Aaron Davis recently spoke to the Daily Business Review about representing the surviving parents whose daughter was killed and son left dependent on constant medical care after a head-on collision caused by a drunk driver.

The $95 million verdict secured by Aaron Davis and Leesfield Scolaro Partner Adam Rose has become the second-largest motor vehicle-related accident verdict at the Miami-Dade Circuit Court and the ninth-largest in Florida history, according to VerdictSearch.

“There’s no amount of money that could ever compensate a family for going through a loss like this,” Davis said. “The biggest challenge is to explain to a family that no matter what we do, you will never be able to put yourself back into the position you were in before this tragedy happened.”

Dangers of mass layoffs: Protect your company from lawsuits

Seemingly every week since the summer, a high-profile employer has been reducing headcount ahead of an anticipated recession. In a recent interview with...

Dangers of mass layoffs: Protect your company from lawsuits

Some of the most essential jobs in the U.S. economy can also be some of the most dangerous and underpaid — and delivery drivers are at the top of the list...